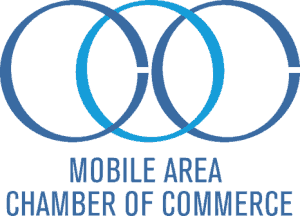 Accreditation recognizes those Chamber that have defined, reached and maintained defined operational performance standards and have significantly contributed to the good of their community, region state and country. The Chamber has been accredited since the designation’s inception more than 40 years ago.

Mobile Area Chamber is a member-driven, nonprofit organization with more than 2,200 members, representing more than 108,000 employees.

From:   the Mobile Area Chamber of Commerce website:
https://mobilechamber.com/